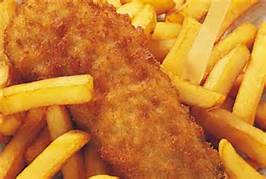 I grew up on Fish and Chips.

None of this four sided – quadrilateral shaped stuff in a box, Neither was it a rounded crispy coated burger – slapped unceremoniously ‘tween two halves of a Seeded Barmcake

No – this was the real thing,

The only dilemma, apart from what fish to have with your chips was whether or not you had Salt and Vinegar on your Chips…if you were lucky the breaded fish soaked it up and gave it that particular flavour.

Feeling brave? then you could ask for Tartar sauce or Lemon on your fish – and Curry with the chips.  Traditionalists went for the Mushy peas with a dash of the ‘special’ chip shop vinegar, it had a consistency that when applied it clung onto the chips or the fish

And as for the fish – Cod or Haddock, Breaded or Battered

Breaded was better for you, and the posher chippies threw in the lemon wedge if you ordered it to make it seem posh.  However most of the time, the breadcrumbs stayed in the container as the boss at the frying station dipped each bit of ordered fish into the chip shop batter –  despite being mightily hot – the fat or oil never really got through this golden layer – leaving the fish cooked and soft inside the special parcel.  you could tell by the way the fish curled up at the edges as it dried off under the service hatch

Another dash of salt and vinegar (and perhaps the curry sauce or peas) and it was then wrapped up in greaseproof and newsprint before money changed hands – leave it open and the lucky soul purchasing could eat them on the way home.

Later on they introduced Pies, and Pasties – 2p wooden forks and as new people arrived in town – new cuisines.  Fishcakes and Spring Rolls found their way on the menu, and the chippy shared space on the street with Indian and Chinese takeaways.

“Do you want peas wi’ your fish love?”

9 replies on “Fish and Chips”

A nice bit of history there!

Ooh! I haven’t had fish and chips for ages! Your description is making me hungry!

Fish and chips-sometimes (quite often) nothing else will do. The squidgy chips… and I like haddock…it is Friday today so perhaps I will be queuing at the Old Friar tonight, after all. Yumm. Thanks for the great blog.

Cheers for taking a look, Nia. My travelog of my Portuguese adventures is now on, feel free to take a look.

Reading this post got me hankering for some fish and chips right now at midnight. Here in Australia, fish and chips is still a favourite after all these years. I grew up eating it on Fridays at home with peas. Had my fair share of higher end fish and chips in the higher end places…but nothing beats the good old take-away fish and chips like you described with the grease proof bag.

Thanks for that, I’ve got the hunger now. I could murder some fresh chips, open, half a shaker of salt and a gallon of vinegar. It’s amazing my local is still in business given my liberal use of the condiments. Great post.