Landing pictures on our telly screens from far far away

Interference from Meteors, Asteroids (or even a Martian or two)

Can make the snap from the satellite look not as

Exact as you would have expected it

Directors playing jigsaw puzzles before putting it on screen

He always wanted to travel

Lego man living on the shelf

his greatest descent – not a fall from grace

but sent into flight from a feather duster

till one day he flew

onto a book that made his dreams

into reality (of sorts) – as he landed and

walked into a patchwork of stars

A painting and poem with a space theme created at night (light pollution permitting!)

Out there in deep space

Revolving particles of matter are

In the creation of

The latest star in the night sky

A response from inky to the six word story challenge

Somewhere out in the northern skies

Really far away, but

Sends you a signal from off in the distance

When the men from the rocket

landed on the moon

and invited them to tea

they looked a little different

And they helped the men collect

rocks and soil from the ground

as the bosses from earth

wanted to know – if there was life around

And after the ‘nauts had left for home

the moon people to earth would go

to learn about their next door neighbours

in their fancy UFO

Another piece inspired by the #Promptuarium

Many thought you a funny kid

On most nights they’d see you staring into space

Overlooking the positions of the stars and the zodiac

Destiny ? to be the first man to live – on a base on the moon

Satellites floating in zero gravity over your head as you

Track your course with telescope, pencil and paper

They pulled the plug

took its power away

a toy for the little green men

with little to do

Reading material on the shelves begin to

Grow, taking over the library

Nip it in the bud – and sort out them shelves

If not, the books will take over the space – Be

Zippy about it – for space is at a premium

Everyone knows you’ll run out of it

In response to the prompt

My Home town has plenty of green space to go at…

Two canals, a river network that runs up northern tributaries to Lancashire, and south towards Cheshire

These canals and rivers meet up near the old dock at Salford Quays, formerly “Manchester Docks”, I walk that way when I either head for the tram bound for Eccles or when i’m on duty at the Northern Branch of the Imperial War Museum

The Canal itself leads on through Manchester and other parts of the county.

The opportunities by the waterside have seen the waterways cleaned up and provide leisure for people all year round.  Narrow boats are a regular sight on the canal network, and moorings line the route all the way to the point where the Irwell and Mersey meet

Opposite the Canal Basin at Castlefield lie the Forum where open air events take place, The Museum of Science and Industry, with its Engines, Cars, and Aeroplanes and the Roman Wall, where the Roman Fort remains are in situ. 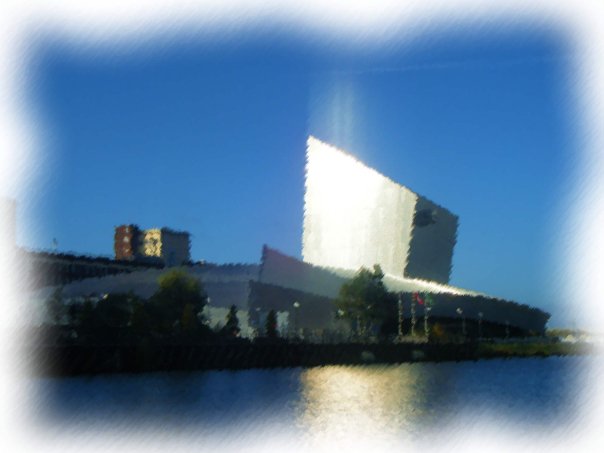