Their pitch was in the perfect location

Their routine rehearsed to perfection

and for once – the sun was shining

No problem with people passing by,

or pigeons up in the blue sky

they had a crowd, who cheered laughed and cried

They sung out most of the afternoon

till the dawn of the appearing evening moon

their caps and cups full, with notes and coins

and rendezvoused back in a caff to rejoin

But after their breakfast and coffee and tea

they soon departed from their moment of glee

for after their repast, after singing their tome

they just had enough for the bus fare home

Paying attention to the pennies should

Really be a priority throughout the year

Destination’s for holidays could be a little closer,

Even after extravagant spending, the piggybank deciding

Nearer to home than the equator

This year – the Bahamas , Next year ? Bournemouth

They say the economy’s stable…

The coinage will, of course be spent sometime soon – or stuck in the piggybank. But for now they sit on the corner of my unit

The atmosphere is electric

some gathered there would say evangelic

as the lights flicker around the evening sky

for the signal to lower the velvet barriers

as a one hit wonder presses a golden button

with that actress you know off the daily soap opera

and then the worship begins

as the bells ring out

and the dinero fills the tills

as the worshippers take their communion home

in the form of homeware, electricals or fashion 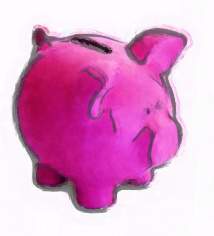 Piggy is much more than humble bacon

It’s common to many – you’re not mistaken

Generous to a fault is dear old pig

Got to be said – his heart is big

Yet to avoid the fate of the butchers hook

he will be found – tending your bank book

For as long as prospectors keep talking

Round the wild valleys they roam

Trekking around the carved out valleys for

Unforetold riches from the Horde of Coins

Navigating the challenging terrain can be difficult

Enjoy your quest – but expect trouble along the gold scattered route.

for forty-eight hours, over five continents

from their own mess

till the moment – the marker stopped

chaos created by an aspect of greed

you have to ask – was there a need?

In response to the prompt Spare

I can remember – as a small lad – being able to make a short ten minute conversation on the phone , all by feeding the BT box that powered the phone two pence pieces.

The phone box?  on the Corner in Tamworth Walk

The recipient ?  Grandad’s House across the road in Napier Street.

Salford seemed a much bigger place then –

10p – price of a mixed bag of sweets, sherbet drops to candied mice.

“The streets of your home city are paved with gold”

….Not Gold exactly – but copper and silver’s just as rewarding.

In my room, on the top of a cupboard by my writing desk, lives a relatively old biscuit tin.  Its Metallic red in colour and has the main characters of the Winnie-the-Pooh stories on it. 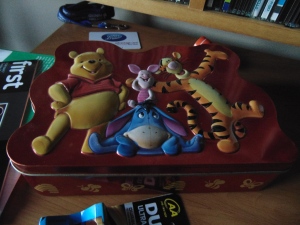 There’s Winnie-the-pooh (or as I like to call him ‘Pooh Bear’), his small friend Piglet, His not so gloomy friend – Eeyore the donkey and his Bouncy friend, Tigger.  The outside rim of the tin has pictures associated with the Hundred Acre Wood where they live in the stories, namely bees and their hives and butterflies.

At the moment – the tin isn’t being used for anything sweet…more to hold the device used to buy something sweet,  Odd stray coppers, and silver coins liberally adorn the gold coloured base of the tin.  At Christmas, the coins will vacate to be used for the next occupants – namely bags of fudge or sweets and later, biscuits – which will be the ones made for the tree itself – made of shortbread and tasting of vanilla honey or chocolate (Pooh Bear would appreciate that a lot)

After Christmas, the biscuits will be long gone – so with the coins away at the bank and the tin lying empty – Honey Cakes will be a perfect replacement (with Easter around the corner), as will the various flavours of fudge which appear around my birthday time.  My Favourite Flavour – Chocolate, but I’ve had everything from Strawberry to Coconut fudge in that tin…and everytime I’ve opened it for a treat there’s always been a little someone pop their head round the kitchen door to see what’s inside it.